When Beavertown announced the first ever Beavertown  Extravaganza back in January, I was very excited to see a big event with such a large variety or beer on tap. Whilst there are lots of other big beer events inside the UK, I’ve never seen one with an exciting brewery list. Beavertown announced 70+ breweries from the launch with over 700 different beers. We’re really blessed to have good access to some incredible beers from the UK, EU or further a field, but with such a wide variety of beers available, it was always going to be a fun event with the opportunity to taste some rare or new beers from some of the best breweries from around the world.

So, when the tickets became available, I had to get involved. As the months, weeks and days passed the excitement for the event increased. I was really impressed with the amount of content & information especially on their site which is where they regally posted new & exciting content highlighting the individual breweries that were attending the event. Those posts along with regular information with regards to the schedule, the do’s & dont’s and what to expect. Before we even arrived, it was clear that the event had been well organised. 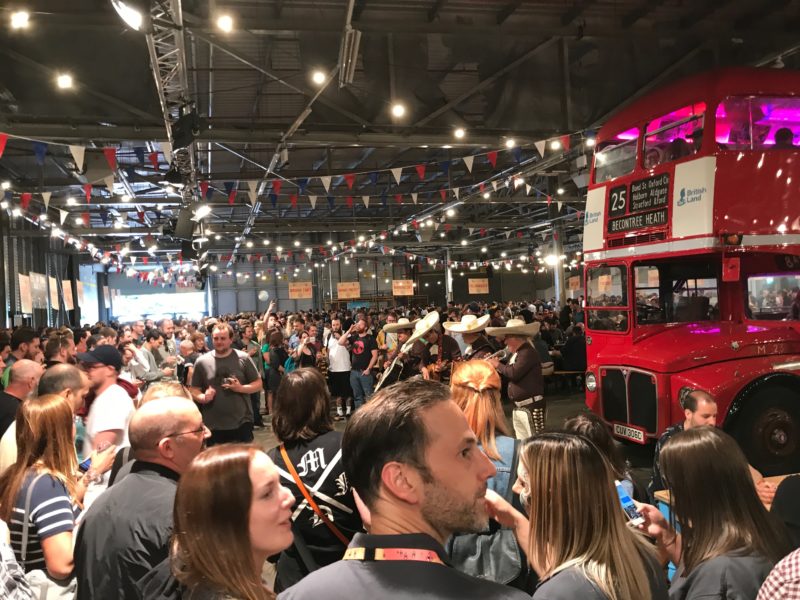 We got to the venue a head of time to ensure we got to the front of the line to ensure we were one of the first attendees through the door. That meant that we arrived an hour or two before the door actually opened so we decided to head to the food court to try out a few options that were on sale. There were about 10/15 different stalls selling food varying from BBQ, Mexican, donuts,  Fish, Jerk chicken and much more. Whilst we didn’t get a chance to sample every stall, I had the opportunity to talk tom some other attendees who had nothing but good things to say about the incredible food.

The team who put together this event did an awesome job. From the get go, it felt as though every aspect to the event had been well thought through. There was an amazing team of volunteers who from the moment you arrived at the tube station would guide you to the venue. Throughout the event, the team were very helpful and they should hold their head high.

I’m sure this is an obvious one but the sheer variety and quality of the beers was really outstanding.

I would suggest that for next year it might be worth getting an app that’s designed for the purpose. Granted, it’s the first year so I wasn’t expecting a solid solution but having an app that allows for zooming in on the map or some sort of beer search/ brewer search would’ve been a nice touch.

Ok, so there’s been a lot of people bitching about how there wasn’t enough beer etc. Before I go any further you should know that I went to the Saturday event and I left feeling that I had plenty of beer and yes, some of the breweries finished early for what ever reason there was still some beer available at other bars and then there were always a few taps of Beavertowns’s headliners available.

So, my problem wasn’t with the amount of beer but simply not delivering on the beer list. I’ve been trying to get my hands on any beers from Dogfish Head Brewing and more specifically, Punkin Ale. When I saw that they were going to have Punkin ale on tap, it made my year and I was very excited to get my hands on it. When we arrived at dogfish head (1:20pm) they were serving Midus Touch and Indian Brown ale. Then we kept coming back to the bar every 20 minutes to ensure we didn’t miss it. However, at 3:40pm the people pouring told me that there’s been a decision from ‘upstairs’ and that Dogfish head won’t be getting any other beer once they’ve used what’s currently on tap. Just after 5pm Dogfish Head was dry. Was this a mistake, or was this ‘upstairs’ trying to save some money? Who knows but what I know is that if you advertise you’re going to put something on then you do it or come out and apologise. I guess the 8+ year wait to try Punkin Ale will continue.

I’ll be going again for sure but Beavertown, if you’re reading this, Please try and stick the to beer list next time or just don’t do one.